The name Willard Peterson does appear as a contest winner on official records of trophy brook and brown trout. Starting in 1924 names and locations were recorded by Fullers Tackle Shop annual big fish contest in Park Rapids, including an 8 1b 9 oz brown caught in 1951 on the Straight River. In that same year on the same river a young man named Willard Peterson made the final adjustments to the log and boulders he carefully positioned on the river bank. He wasn’t thinking this hard work might earn him the coveted Sigurd Olson award (which it did) or trigger the Minnesota DNR to hire him after retirement to do habitat work. Dr. Willard Peterson simply knew big brown trout preferred protected cover because that’s where he always caught them. According to his son Joel, from age 10 and every summer thereafter, he and his two brothers were always hauling logs, repairing river banks, building cover structures, and, of course, fishing for big trout with their father on the Straight. The major river repair and habitat work successfully accomplished in the last seven years still relates back to Dr. Willard Peterson and the $100,000 trust fund he established for the Straight River through the Minnesota Council of TU. This commitment, love, and sacrifice by private individuals is an integral part of the story of the Straight River that flows like the river itself.

I would like to acknowledge and thank Doug Kingsley and Mike Kelly from the Park Rapids DNR fisheries of office. They supplied most of the river facts and data contained in this article. Their help, along with Joel Peterson and John Lenczewski, was critical to developing and sharing this unique story.

The Straight River is 18.1 (GPS measurement) miles long and its headwaters at Straight Lake is located 10 miles west of Park Rapids. The entire watershed including Straight Lake Creek is 52,765 acres. The river flows southeasterly meeting the Fish Hook River just south of Park Rapids. The geology is that of a glacial outwash sand plain. Most of this land is agricultural, irrigated by center pivots which we will briefly discuss later. 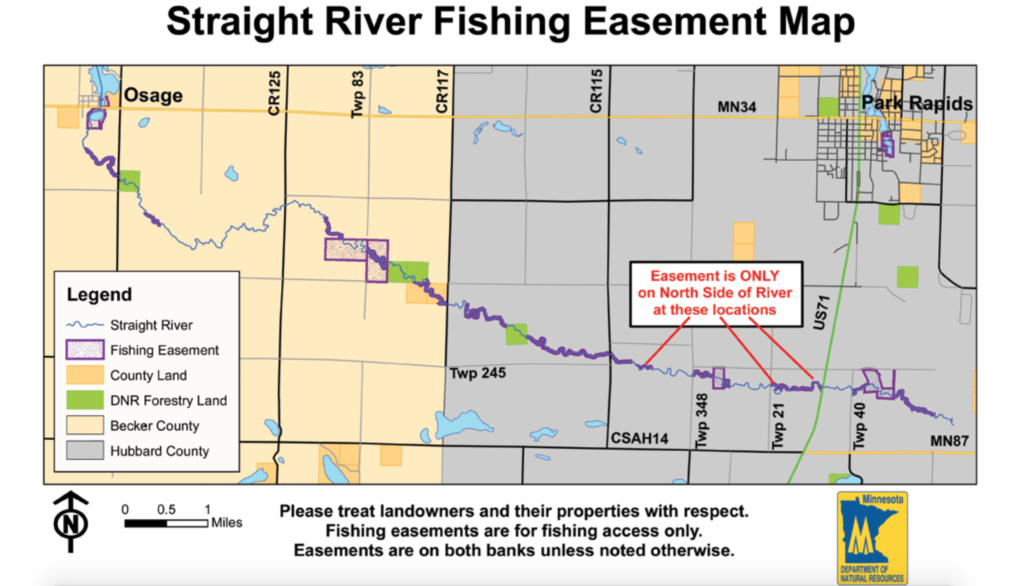 Of immediate interest to trout anglers is that 63% of the river’s length has public access and/or DNR owned easements. Also important to anglers is that 8 of the 9 road crossings have angling easements adjacent to them. Like many streams in Minnesota, the Straight River transitioned from brook trout to a mixed fishery of browns and rainbows in the time between 1947 and 1970. By 1976 it had became primarily a brown trout river. In the late 1980’s the decision was made to manage the Straight as a naturalized brown trout river and stocking was discontinued in 1991. Cold water discharges from the surrounding underlying aquifer cool the river and permit this wild population of brown trout to exist and flourish.

While the fisheries were changing, historic logging and other poor land use activities over the past century left habitat between the two roads located 3 and 5 miles west of Park Rapids severely degraded. These activities left the river channel overly wide so that this low gradient river could no longer move its sediment load. Reduced base flows from increased withdrawal of groundwater likely contributed to the inability to flush sediment in this wider channel. The result was an overly wide and shallow channel which warmed the water and provided little trout habitat. The DNR and TU agreed that the river channel needed to be narrowed and deepened. A plan was devised to carefully place entire mature jack pines in strategic locations in the channel to capture sediment, narrow the channel and allow vegetation to become established in newly filled areas. It was hoped that the narrowed channel and trees would scour a deeper channel, especially near the ends of the tree structures. 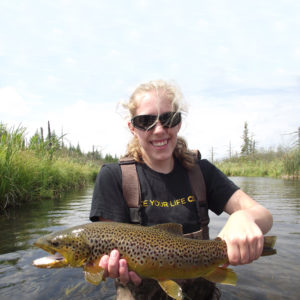 Due to the shallow boggy nature of the adjacent land, the most efficient and cost effective means to place these large trees in the channel was by helicopter. Two initial “tree drops” were done in 2006 and 2007, when 15 tree clusters were placed in a 2,900 foot reach. The DNR evaluated their effectiveness and deter- mined that more trees and larger clusters of them were needed to make them more effective.

In 2009, Minnesota TU wrote a grant for “Lessard” funding, paired with monies from MNTU’s Straight River Fund, to extend the work. Following careful survey, design, and planning in 2011, more than 100 large jack pines were lowered into predetermined locations along one mile of river. Some went to augment the earlier structures. MNTU worked closely with DNR Fisheries, Ecological & Water Resources and Forestry divisions and local landowners. More than 25 log structures, each using 3 or 4 whole trees (weighing 800 – 1200+ pounds each) were carefully placed by a skilled helicopter operator and teams on the ground and in the river muck. TU volunteers and DNR staff then anchored the trees in place with long wooden stakes. I was fortunate enough to be among the volunteers.

Sitting in a canoe and watching the helicopter fly by with a large mature pine and skillfully position it in the river with help from DNR forestry’s Helitac crew gave me a great feeling of pride to be involved with Trout Unlimited. I can’t help but think Doc Peterson is smiling down on the great success of this project and the fact his gift to Minnesota TU was used along with Lessard-Sams Out- door Heritage Fund dollars to make this happen.

The great news for trout anglers and the river is that the tree structures are work- ing well. They have already begun to capture sediment, narrow the channel, restore a more natural meander pattern, and deepen the channel to create better fish habitat and lower water temperatures. For example, the average channel width at bank-full flows has been reduced in the upper portion of the project area from 97 feet to 49 feet. An even better fact is that the brown trout are responding. Fishery assessments have shown dramatic improvements throughout the mile long project reach. 2012 sampling showed increases across the board with 2 to 7 times as many sh sampled per 100 feet of river, and average lengths increased by 0.5 to 3.0 inches. Especially exciting is that fourteen trophy brown trout over 20” in length were sampled in just the upper half of the project area.

Does this mean you can go to the Straight and catch lots of trout plus a real trophy? We all wish it was that simple. Catching trout usually depends on a person’s skill and knowledge of both the fish and the river. Your best chance to catch a trophy on the Straight is during the large “hex” may fly hatch that usually occurs in the middle to the end of June and after sunset. You can find hatches of March Browns, Brown Drakes, Baetis, Sulfurs and Trico’s often sparse but worth the effort. I have even experienced an overcast midday when a simple purple wooly bugger brought a big brown up to dance. It is a beautiful river that is easier to float than it is to wade. We ask you remember to limit your catch and always limit your kill, a trophy fish deserves to live.

Minnesota TU successfully wrote another Outdoor Heritage Fund (“Lessard”) grant to do still more of this channel restoration and trout habitat improvement work. These new funds will become available on July 1. These state funds, along with Doc Peterson’s gift to MNTU, will fund another tree drop project in summer 2015.

We cannot forget the private landowners who cherish the river and grant access to the rest of us. One shining example is that of Dick Frantes, a longtime TU member from the Twin Cities, who loved and preserved a beautiful 80 acre parcel with the Straight running through it. After Dick’s passing, his daughter Janette sacrificed money and time to preserve her father’s legacy for the benefit of all of us. She could have easily sold the property to a developer, but she knew her father wanted the DNR to acquire the land and keep it wild. When the DNR process dragged on and her financial situation threatened to scuttle her dream of protecting the property, she turned to TU for help. In 2009 the Minnesota Council purchased a real estate option to see her through until the land was purchased by the DNR. We all owe her our deep gratitude for her dedication and persistence in preserving this little slice of heaven.

Like most of our trout streams, there are ongoing threats and concerns. Perhaps the biggest concern for the Straight River is the maintenance of groundwater flows which keep this amazing river cool enough to support trout. Appropriations of groundwater from the Straight River’s aquifer for irrigating potatoes began to skyrocket in the 1990s. Minnesota TU fought many battles in the 90s to force state agencies to look at the cumulative impact of increasing irrigation. A settlement MNTU forged with a large producer was used to fund development by the DNR of a groundwater model for determining how increased withdrawals would affect the trout fishery. The DNR has documented that increased groundwater appropriations from the Straight River’s aquifer have negatively impacted the trout fishery. Research is continuing in an attempt to determine what level of water withdrawals could occur while maintaining suitable water temperatures in the Straight during low summer flows. The Straight should benefit from being one of the DNR’s pilot groundwater management areas.

If you visit the river give a word of thanks to past fellow anglers like Peterson and Frantes. Their contribution lives on keeping the Straight wild, clean, cold and clear.