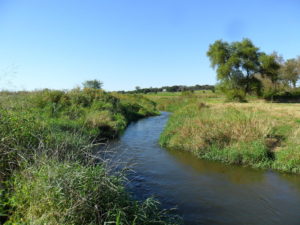 Mill Creek is a tributary of the North Branch of the Root River, running generally south from its headwaters below Interstate 90. The stream crosses from the east side of a broad valley towards the west side at the junction of Olmsted County Rd 137 and US52, then follows the west side of the valley towards, and then through the city of Chatfield and on to the North Branch of the Root.
While many folks cross Mill on their way to more storied streams, Mill Creek is definitely worth a visit. There is a considerable amount of angler access and restoration work, as well as a willing population of browns, with an occasional rainbow that has traveled up from stockings in Chatfield. You can find Mill Creek on Map 4 of the DNR’s 2015 Trout Angling Opportunities map book or from the MNDNR’s Lanesboro Fisheries web page. This map shows the latest updates to the angling easements on all streams. There are now angling easements from about ½ mile upstream of the US 52 Bridge all the way to MN 30 – a distance of over four contiguous stream miles. Within that span of eased stream there are four restoration projects and an unrestored segment.
Upstream from US 52 is an Hiawatha Trout Unlimited (HTU)/MNTU project completed in 2011, accessed from County 137. The newest easement runs about three fourths of a mile downstream from US 52, and shows what the project areas looked like before restoration: high banks and box elder. There is a bridge on Spring Rd that can be used to access the new easement.
Downstream from the unrestored reach is an HTU/MNTU project completed in 2013, which is over a mile in length. Continuing downstream from the 2013 work is the latest HTU/MNTU project, completed in 2016, covering around two miles of stream. At the downstream end of that project starts MN DNR work, a pasture reach with skyhooks, which takes you all the way down the MN30.
To legally access the latest project from the intersection of MN 30 and US 52, travel about two tenths of a mile west on MN 30, crossing Mill Creek, and turn north on Mill Creek Road SE. Continue about four tenths of a mile until you reach a westward bend in the road, where you’ll see the snowmobile bridge and several stiles. There’s room to pull off the road to park, but in the winter be sure not to block the snowmobile trail approaches to the bridge. In all seasons please be respectful of the homes, field entrances and driveways.
To get to the stream, you can use a stile or cross to the other side over the bridge, but I usually stick to the stiles and start fishing upstream along the west side of the stream.
Mill is narrow enough that wading isn’t really required to fish it as you can reach what you need to from either bank. If the water is cloudy or murky – as it often is following heavier rains – don’t assume the water near the bank is shallow, as you could be in for a bit of a cold surprise. I tend to cross the stream at shallow riffles or farm crossings along the project, and stay out of the stream as much as possible.
Before the restoration project, there were scattered spots of habitat, with shallow and silty sections in between. Box elders and willows dominated. Where they didn’t, thick patches of reed canary grass made walking difficult, and exciting, should you happen to stumble onto an occupied wild turkey nest like I did one afternoon.

The restoration goal was to lower and slope the banks, narrow the stream to appropriate dimensions, and retain the existing good spots of habitat where we could, while adding in habitat where none existed. Hundreds of trees, tree trunks with root wads, and tons of rock were turned into habitat for trout, baitfish and macroinvertebrates.
Rather than locking the stream channel in place with rock, jute erosion control fabric and wood stakes protect the banks from damage while the diverse mix of grasses and forbs grow in. Most of the project was completed and seeded in late summer 2015, with a new channel bypassing a highly eroded section opened in 2016. The now bypassed bend, which was going to be cut off from the stream, functions as non-game wildlife habitat.
The first several hundred yards upstream from the bridge are fairly sinuous with a number of sharp bends with rock and log cover, as well as riffles and larger cover rock. Sprau Creek, managed for brook trout by the DNR, comes in from the east as well.
Above that, you’ll find a variety of pools, bends, riffles, and runs. A farm road parallels the stream through the upper two thirds of the project, but the stream often curves off towards the bluff side on the west of the stream. Where it falls within the angling easement the road does help make walking easier. In the winter it’s a snowmobile trail and caution is advised.
An experimental restoration approach in one wider and slower section added in revetments composed of cedar boughs and trees cabled to the stream bed with duckbill anchors. The branches and boughs will catch sediment, eventually gathering enough soil and debris to narrow the stream, while providing cover for insects and fish. The revetments have already survived a number of high water events and appear to be gathering sediment and debris.
Mill Creek tends to be on the warm side for a trout stream and, like similar streams, that means lots of baitfish. That also tends to indicate there may be some larger trout that like to eat them, so try throwing a streamer, especially in low light, fall, or if there’s a tinge to the water. One cloudy/misty afternoon this past summer, with the stream running cloudy from recent rains, I hooked a number of browns larger than 12” (and landed a smaller number, unfortunately) working a weighted black bunny strip streamer along a stretch with wood and rock cover built into the bank of the stream.
In the summer, if you do start catching chubs, you’re probably in a section that’s too warm or slow for trout. Move a few yards up or downstream, and you’ll find cooler water. I’ve had plenty of success with caddis patterns in pupae, emerger or dry forms. Drifting or swinging an elk hair caddis in the warmer months will often be productive even if there aren’t a lot of bugs in the air. The typical midge, mayfly and scud patterns should work as well on Mill as they do elsewhere in the area.
In late summer and fall I’ve had fun with grasshopper patterns splatted down in the riffles, drifted or skated across the current.
As the substrate of the streams flushes and cleans itself it’ll be interesting to see how the mayfly population responds. Where there were long silty sections, there are now riffles and cleaner substrates, so there’s hope for increased populations.
You won’t find pure solitude on Mill Creek as US 52 is just a few hundred yards off, and you might occasionally hear a PA announcement at the implement dealer or catch a whiff of the fryer at the nearby Dairy Queen, but there’s enough stream for a whole day’s worth of fishing. You’ll also find Mill Creek a good spot for a quick hour or two of easy-access fishing… with the DQ just a few minutes away.
Habitat Project Page