Minnesota Trout Unlimited has a long history of working on habitat improvement projects across the state.  From limestone streams in southeast Minnesota to the cascading streams of the North Shore, MNTU has been a leader in protecting, restoring and enhancing our coldwater resources.

In November 2008, Minnesota voters approved a constitutional amendment dedicating the proceeds of a new state sales tax to protecting and improving Minnesota’s natural resources.  A competitive grant process followed and in March 2009 the Lessard-Sams Outdoor Heritage Council recommended full funding of Minnesota Trout Unlimited’s proposal to improve coldwater habitat in eleven streams around the state. Fifteen miles of stream work was completed with this first round of funding.  This was the first step in a new phase of MNTU’s habitat work around the state.  In the years that have followed, funding from the Outdoor Heritage Fund has enabled MNTU to complete habitat projects in dozens of locations around the state.  Along with other federal, state and private funds, MNTU has been able to greatly expand our restoration work improving coldwater habitat around the state. MNTU is a responsible manager of grant funding and is proud that administrative costs average less than 5% of grant funding.  On completed grants, only 4.2% of funding was utilized for TU administrative costs.

Minnesota Trout Unlimited and its six TU chapters, with assistance from the MNDNR, has stabilized stream banks, improved water quality, and increased habitat for trout and non-game species.   Minnesota TU members are honored to have been given this opportunity to improve Minnesota’s coldwater resources for all anglers and citizens.  We are thankful to the Lessard-Sams Outdoor Heritage Council, the Minnesota Legislature and Minnesota taxpayers for partnering with us to improve our State’s resources.

When is a habitat project truly completed?

Because trout habitat work is done in areas at the edge of streams where flows rise and fall frequently and unpredictably, and where flooding over the banks is not uncommon, projects remain very vulnerable to erosion until riparian vegetation becomes well established.  It typically takes two full growing seasons or more after the year of the initial installation for the growth of adequate vegetation root mass.  For example, a project first installed or reported as having been “completed” in 2018 will not truly be complete until fall 2020 or later.  Some erosion and settling of soil is inevitable for the first couple years.  We plan for this and contract for two years of inspections and repair/maintenance.  In addition, we count of floods to scour pools and move sediments in ways which gradually narrow and deepen streams.  Thus even the best designed habitat projects will not be complete until 2 or 3 years (or more) after they are initially reported as having been completed.

Repair and Maintenance of Habitat Projects

Trout habitat work remains very vulnerable to erosion until riparian vegetation becomes well established.  This usually takes two full growing seasons after the year of the initial installation work.  Since some erosion and settling of soil is almost inevitable these first couple years, our contracts with both the design firm and the construction contractor require they periodically inspect and repair the project site for two full years after the year of installation (for example, 2018 installation means inspection and repairs through October 2020).  Because habitat work in dynamic streams involves a fair degree of “art” in addition to science, sometimes flooding reveals where a design tweak is needed.  This is another reason why our repair/maintenance provisions are this long, since floods typically occur every year and a half and well within our repair/maintenance performance period.  If a flood reveals a design or installation shortcoming it too will be corrected as part of the repair/maintenance process.

Even the best designed and installed habitat work occasionally needs some maintenance or repair.  In many parts of the state even a run of the mill flood can carry large logs and whole trees downstream for considerable distances.  When these large logs and trees catch in a bend or other feature they can cause significant erosion and even blow out stream banks and their installed habitat.  As the amount of improved habitat increases due to the work of MNDNR and TU the need for funding for regular maintenance will increase.  Outdoor Heritage Fund dollars may not be available for this type of work, so securing other funding sources for either MNDNR or TU to make repairs remains an important need.

The goals of trout habitat improvement projects are to increase the carrying capacity and trout population of the streams, while also improving water quality, providing benefits to aquatic, terrestrial and avian wildlife, and increasing angling access and participation.  The specific objectives, scope, and methods utilized vary by project site, but some fundamental concepts apply statewide:

Floods unleash a huge amount of energy into stream channels.  The habitat provided by stream banks and in-stream features can be damaged or destroyed unless the flood energy can be released outside the stream channel.  Healthy streams do this by quickly dissipating most of the flood’s energy outside the stream channel on the stream’s floodplain.  Most streams have become degraded over many decades and the stream beds are trapped between unnaturally tall, sheer and highly erodible banks which prevent rising waters from quickly spreading out onto the floodplain.  This traps excessive energy within these too-high banks, which damages or “blows out” in-stream habitat.  A key aspect of every project is removing and sloping back streamside sediments, opening up easy access to the floodplain. 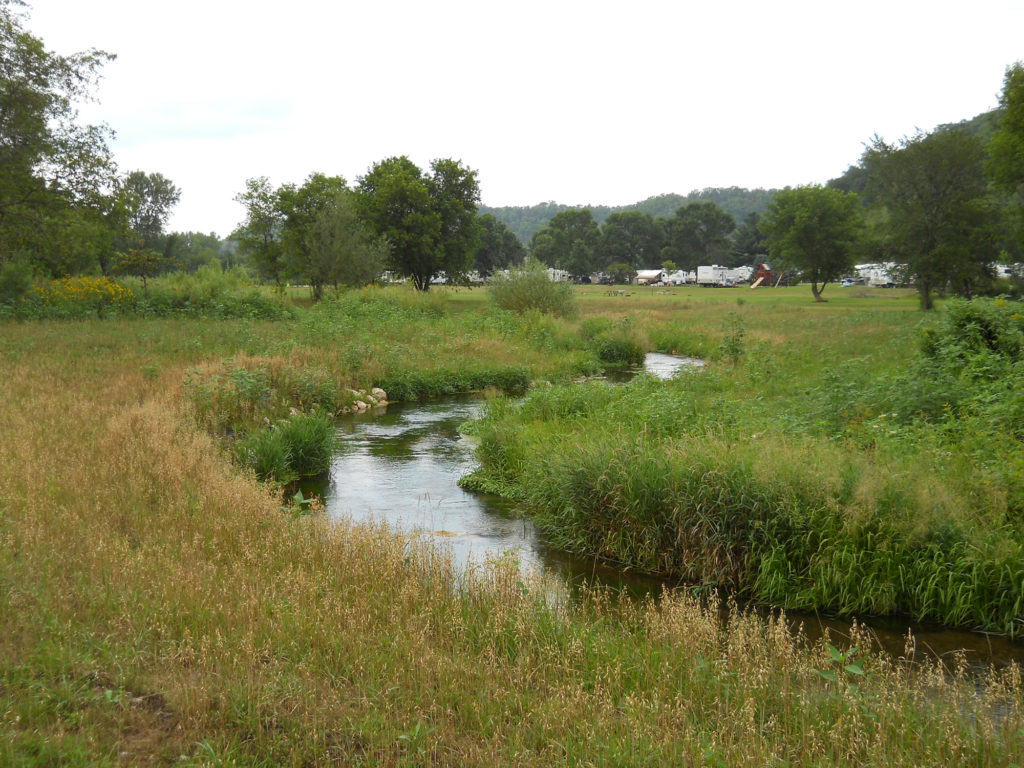 Floods provide much of the energy which digs out and maintains pools.  Projects are designed with two separate flows in mind – low/base flows in which in-stream habitat must function and flood flows which help create and/or maintain habitat, but which must be managed so excess energy is carried outside the stream channel.  Bank sloping designs are developed from upstream to downstream, always keeping in mind that the stream’s power must go somewhere.  If pressure is relieved on one bank, it may increase pressure on another area.

Streams do not just move water, they also move the material which they erode from their banks and bed.  Every stream moves sediment, but the amount and size of this “sediment load” can vary greatly.  Higher flows and floods can move larger sized material than base flows (rocks and cobble versus sand and silt).  A properly sized stream channel moves sediment efficiently so that sediment is not deposited unnaturally in the stream reach (aggradation), and does not cut down too deeply into the stream bottom (degradation), causing the streambanks to rise and reducing access to the floodplain.  We now pay closer attention to sediments loads and adjust channel dimensions to maintain streambed substrates free of excessive sand and silt.

Trout need a mixture of different habitat, including spawning habitat, juvenile rearing habitat, food production areas, cover habitat (feeding, resting and escape) and overwintering habitat.  The ability to move between these different types of habitats at important times (daily, seasonally, etc.) is important and why restoring or improving the connectedness of stream habitats is a key component of some projects.

Looking for more detail on the design of MNTU’s habitat work?