What is ballast water and why do we care? 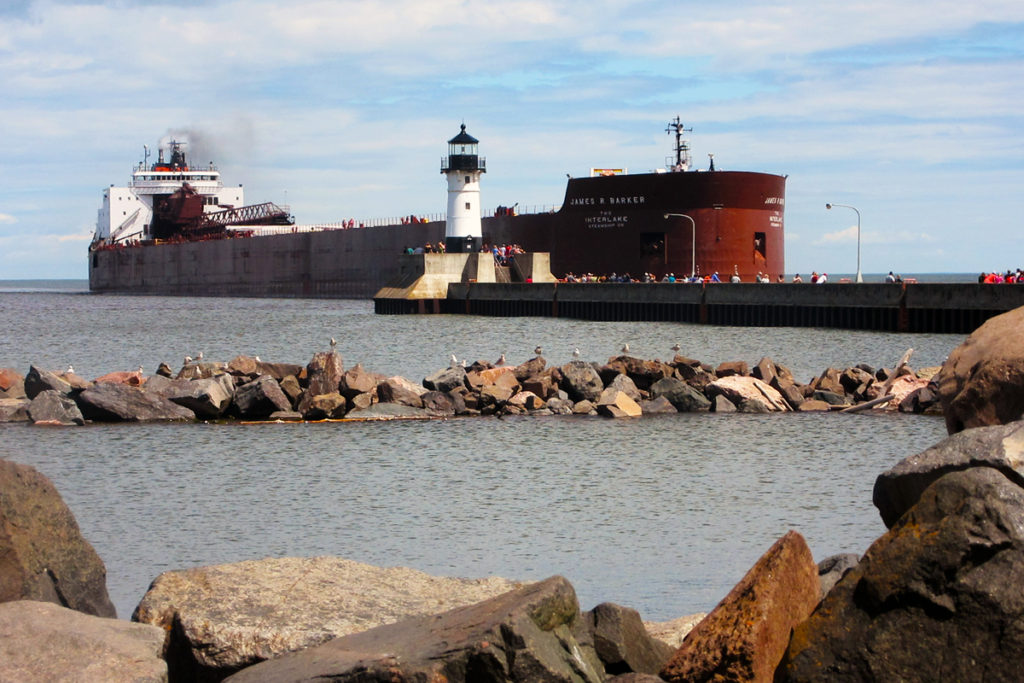 Larger shipping vessels transiting the Great Lakes and oceans utilize water in internal ballast tanks to stabilize the ships.  Ballast water is taken on or discharged by ships to adjust for changes in the ship’s weight due to the loading and unloading of cargo, fuel loading, and to increase stability under severe weather conditions.  Unfortunately, when ballast water is taken on from a port contaminated with aquatic invasive species, the aquatic invasive species are also taken into the ballast tanks and, under the right conditions, can survive until discharged alive into a Lake Superior port.

Ballast water discharges into the Great Lakes are the source of aquatic invasive species like zebra mussels, spiny water fleas, quagga mussels and many more.  Originally introduced in the ballast water discharged by oceangoing vessels originating in Europe and Asia, these invasive species can be, and have been, spread from infested ports in the lower Great Lakes to Lake Superior by ships operating entirely within the Great Lakes. These intra-Great Lakes ships are called “lakers,” but should not be confused with our amazing native lake trout (Salvelinus namaycush) which are affectionately referred to by the same moniker. The Minnesota waters of Lake Superior receive more than half of all ballast water discharges in the entire Great Lakes!  The aquatic invasive species are eventually spread from Great Lakes ports by recreational boaters, bait buckets, etc., and end up in our inland waters. The list of inland lakes whose fisheries have been upended by invasive critters like zebra mussels continues to grow.  Many will be spread to inland trout lakes and streams.

Ballast water discharges are regulated by the EPA under the Clean Water Act.  Federal agencies have been slow to meaningfully regulate ballast water discharges and have elected not to regulate discharges from “lakers” at all.  One feature of the Clean Water Act is that individual states can elect to adopt their own regulations for state waters via “401 Certification,” when they believe the national regulations are not protective enough.  Beginning in 2008, the State of Minnesota adopted its own ballast regulations which, importantly, apply to all large vessels including “lakers.”

Over the past few years, MNTU and many partners have fought back federal legislation which would have eliminated Minnesota’s rules, including the regulation of “lakers.”  Many TU members responded to MNTU’s action alerts and helped us repeatedly defeat bad provisions contained in the Vessel Incidental Discharge Act, or “VIDA.” VIDA would have: (1) transferred regulatory authority from the EPA, the agency with water pollution expertise, to the Coast Guard; (2) eliminated Minnesota’s right to protect Lake Superior and state waters via Minnesota’s carefully crafted regulations; (3) exempted “lakers” from regulation; and (4) removed the Clean Water Act’s mechanism which drives the development of improvements in treatment technology.

After the last defeat of VIDA in April 2018, several Great Lakes senators began intensive work on compromise legislation.  While done mostly out of the spotlight, groups such as MNTU who had long been engaged on this issue provided input to Congressional offices throughout the summer and fall.  A compromise was eventually reached which, while we are not thrilled about, we can live with. The compromise legislation, known as the Vessel Discharge Reform Act of 2018, unexpectedly moved rapidly through Congress following the November elections and was passed.  This should put an end to years of terrible bills.

Key features of the new federal law include: (1) the EPA will oversee adoption of a new water quality standard for ballast water, which must be at least as strong as current standards; (2) the new regulation must cover “lakers;” (3) State regulations, like Minnesota’s regulation on “lakers,” remain in place until the new federal regulation takes effect; (4) Great Lakes states can agree to make stricter standards; and (5) funding is available to develop and test ship treatment technologies.

Several treatment technologies for freshwater “lakers” have been developed, but there has not been adequate funding available to test the systems and obtain Coast Guard approval.  The new funding source presents a major opportunity for progress. But it will take leadership by the new governor and Minnesota Pollution Control Agency to ensure that testing and system approval gets done without delay.  If they do, Minnesota will be able to both protect our waters and ensure a safe, robust shipping industry.