The Rush – Pine Watershed in southeastern Minnesota is really an 80,000 acre microcosm of the Driftless Area. Situated between the towns of Lewiston, on the north, and Rushford about 20 miles away to the southeast, this watershed is comprised of a half-dozen quality trout streams, of which Rush Creek and Pine Creek predominate.

Both Rush and Pine with their respective tributaries are streams that have boasted healthy populations of trout for many years, so we are fortunate the DNR has done a thorough job of acquiring angling easements from property owners along both of these flows. Also as a result of these easements , Rush and Pine have also been the focus of habitat improvement work, both before and after the Legacy Amendment which came into being five years ago.

One of the most concentrated and ambitious efforts in Habitat Improvement work that Trout Unlimited and its allies have made recently has benefited Pine Creek in southern Winona County; and since there are two different Pine Creeks in southern Winona County, let me direct you to the Pine Creek which is west of State Highway 43. In the DNR Fisheries “Trout Angling” map booklet, turn to Map 5 on page 14. This Pine Creek is sometimes listed as the Fillmore County Pine Creek, but the improved stretch we are focusing on runs mostly from west to east along Winona County Road 2.

This stretch of Pine Creek has two fairly new bridges, the lower one along CR 2 near the confluence of Pine with Rush. The upper bridge, actually along the intersecting School Section Road, is a good starting point, partly because of an Angler’s parking lot that was built a few years ago near the bridge to accommodate trouters and users of the State Forestry land that lies on the south side of Pine Creek, upstream from the bridge. The habitat work that was completed on Pine Creek above the School Section Road Bridge is around 25 years old and runs upstream almost to the confluence with Coolridge Creek. The new habitat work began at this bridge and extends downstream for about two miles. The first mile was completed in 2012 and the second mile was completed just last fall.

You can “gear up” at the parking lot and start your downstream trek, going as far as you have time and inclination. Walking “down” a new stretch first before fishing your way back up is a good way to familiarize yourself with the layout of the pools, runs and riffles. The corridor along the stream is wide enough on the north side so you won’t have to be right on top of things going down and still be able to notice some areas that look fishy that you might have walked up on too closely when fishing back upstream, had you not scouted them out on the way down. 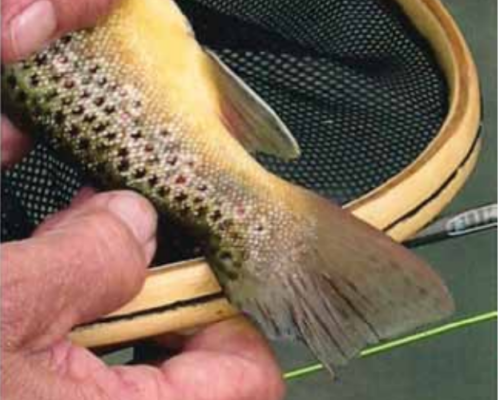 This first mile down from the School Section Road bridge is really a night to day difference from before the habitat work. Before the work, I avoided this stretch. Now, it’s one of my favorite destinations. It used to be difficult to fish because of steep, six to eight-foot mud banks and overhanging box elder trees everywhere. Also, the flow through that mile used to be quite slow with mostly long pools without many riffles or runs. Part of the success of this project is due to the logging crew that went through this A nice Pine Creek brown trout caught on a streamer from the habitat improvement section Failing banks on Pine Creek Prior to Habitat work Fishing Pine Creek After Improvement 4 entire stretch the winter before TU did the in-stream habitat work. The riparian corridor was cleared of shallow-rooted box elder trees. The crew had massive chippers, and the scrap wood chips were trucked to LaCrosse, Wisconsin, to make electrical power.

Now, even though the stretch is fairly straight, the plunge pools with embedded skyhooks (fish hiding structures), the A clipped tail on a Pine Creek brown trout indicating a possibly PIT tagged fish slight meanders, and the nicely sloped banks make for an enjoyable outing. Pine Creek has great invertebrate diversity with most of the hatches common to our area. The tricorythodes or “trico” hatch is one mayfly species that does not appear in all of our streams, but Pine Creek has great trico hatches in the fall. Because of the speed of water coming into these plunge pools and the depth of four to five feet going past some of the structures, if a hatch is not happening, you will need to weight your offerings to get them down far enough to entice the trout. I have had good success with streamers with Clouser eyes at those in-between times. A bead headed nymph will fish equally as well.

Brown trout will be what you will catch mostly in this stretch, but two brook trout streams (Hemmingway and Coolridge) do empty into Pine above this location, so an occasional brookie isn’t out of the question. Because the brookies in this system, through DNA studies, have been identified as Heritage fish, the fisheries folks with the MN DNR are in the midst of an intensive ten-year program that includes implanting Passive Integrated Transponder (PIT) Tags in brook trout and some brown trout that allow them to verify growth rates and movement. Fish with a PIT Tag embedded have a clipped fin, either adipose or caudal. In case some of you decide to kill a fish, check The Pine & Rush Creek area in Southeast Minnesota near Rushford. shaded areas are DNR easements open for fishing. Map courtesy MN DNR for clipped fins before biting down.

The fishing in Pine Creek is good, and it’s only going to get better because of the great collaboration of MN TU, local TU Chapters, TU DARE, TU National, the Winona County SWCD and Federal Farm dollars, the LSOHC, our MN legislature, and most importantly, the important landowners. This project is ongoing as funds to support the work on the third mile down-stream from the School Section Road bridge have been approved. The project should continue this next spring on Pine Creek as it meanders its way to Rush Creek near the Winona/Fillmore County border.