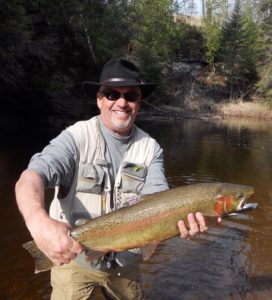 The Emergence of a Unique Wild Fishery

Minnesota’s North Shore is a rugged, harsh environment where only the fittest wild fish can manage to survive. The portions of tributary streams below barrier waterfalls, which are accessible to lake run fish such as steelhead, nearly freeze solid during some winters and become extremely low and warm each July and August. Despite these extremes, Minnesota’s wild steelhead populations have survived, and at times thrived, adapting to these harsh conditions over nearly 25 generations in Lake Superior. From modest initial stockings on the Canadian shore in the late 1800s, naturally reproducing steelhead spread throughout the Lake Superior basin and quickly established self-sustaining populations. Minnesota’s wild fishery became legendary by the mid-1900s.

However, a rather dramatic decline of the North Shore’s storied steelhead fishery occurred from the late 1970s through mid-1990s. This was due to many factors, including overharvest, altered hydrology and stream habitat and changes in Lake Superior’s forage base. Recent research suggests a misguided put-and- take hatchery program begun in the 1970s may also have undercut steelhead reproduction. Since the 1980s the DNR and nonprofits have worked hard to stop the decline of the wild steelhead fishery and slowly rebuild it. We have been making good progress, and steelhead fishing is very good. Nevertheless we have a considerable ways to go to fully recover this amazing, popular fishery.

A North Shore Steelhead Plan was developed in 1992 with a goal of stopping the decline of adult steelhead and gathering the necessary information to rehabilitate wild steelhead stocks. The wild steelhead harvest was dropped to one fish, 28” or longer. This change was too little too late to produce a measurable improvement by 1996, when the Plan was revised and rolled into the Lake Superior management plan. North Shore anglers then pushed the DNR to move to a catch and release regulation for wild steelhead, and this went into effect in 1997. The steelhead fishery has rebounded slowly and steelhead catch rates are now very good.

The DNR’s stated goal in the 1996 and 2006 Lake Superior Management Plans is to rehabilitate naturalized (wild) steelhead stocks to achieve a level that will allow limited angler harvest supported by naturally reproducing populations. This is a very good, appropriate goal which MNTU has consistently supported and actively worked with DNR and other partners to help achieve. Unfortunately, the DNR has also chose to continue what MNTU cautioned was a counterproductive and dangerous stocking strategy to appease a segment of harvest anglers unwilling to wait for steelhead recovery. To provide uninterrupted harvest, the DNR continued stocking a domesticated hatchery strain of rainbow trout known as “kamloops”, despite the fact that numerous scientific studies indicated these domesticated fish would interfere with wild steelhead reproduction. Genetic testing methods in the 1990s were not sophisticated enough to identify unique “kamloops” genes and lacking clear proof to the contrary the DNR was willing to tell North Shore anglers that they could have their cake and eat it too.

Recent advances in genetic testing methods have at last enabled DNR to get hard data to answer tough questions. Myths that domesticated kamloops might not be spawning with steelhead and even if they were, that no hybrids could survive, have now been debunked. Results from 2016 sampling, the first year of a genetics study, uncovered some alarming result.  Results from 2017 sampling confirmed them.  At last the DNR has hard data proving that kamloops are hybridizing with wild steelhead and doing so in rivers from Canada to the Nemadji basin south of Duluth.

On March 15, 2018 the Minnesota Department of Natural Resources (DNR) announced that it will make long overdue changes in stocking practices in North Shore rivers in order to preserve and rebuild Minnesota’s unique wild steelhead fishery, while allowing time for full recovery of the population before any harvest of wild steelhead.  Minnesota Trout Unlimited worked hard encouraging the DNR to follow the science and we welcome this announcement.  See our statement in support of this decision HERE.